What’s the Difference Between a Pomelo and a Grapefruit?

How these related citrus fruits are alike – and how they’re not.

Ever hear of a pomelo? If you love the taste of grapefruit, you owe a debt of gratitude to this lesser-known Southeast Asian citrus fruit, because it’s grapefruit’s director ancestor…grapefruit are actually a hybrid resulting from crossing pomelos with oranges. This relationship is probably at least part of the reason why grapefruit are sometimes erroneously referred to as pomelos, but while the two citrus fruits have many similarities, they’re also very different. Here’s how these two related fruits compare with one another:

How Grapefruit and Pomelo are Different

How Grapefruit and Pomelo are Alike

Regardless of their differences, both fruits are nutritious, refreshing and delicious. And if you already enjoy grapefruit, you may find that including pomelos in your diet may offer a welcome change. 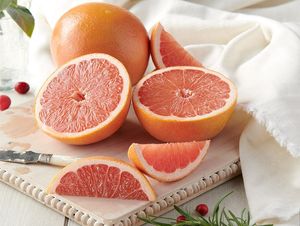 The sweetest Grapefruit you can buy!
Shop Now