When are watermelons in season?

Watermelon is native to Africa and is related to squash, cucumbers, cantaloupe, and pumpkins.   Today, watermelons are grown in almost a hundred countries and come in more than a thousand varieties.

Among the most popular varieties are:

What Are the Health Benefits of a Watermelon?

Almost everyone loves watermelons, especially during summertime. They are a juicy and tasty treat and offer a variety of health benefits. Composed of 92% water, they contain 46 calories per cup and have no fat. They are a good source of antioxidants, beta-carotene, and vitamin C. Among their antioxidants, lycopene is known to decrease the risk of cardiovascular disease and cancer.

Watermelon season runs throughout the summer (May to September). The exact months may vary depending on where you live. The geographical area plays a big role in determining the watermelon season. In warmer areas, watermelon season may start as early as June up to August, while in cooler areas it can start by the end of July and end early September. One thing is sure though, when summertime comes, so will the watermelons.

Growing Your Own Watermelon

If you just love watermelon so much that you want to grow your own watermelons, start by learning when the watermelon season begins in your area. Generally, watermelon planting should be done about a month after the last frost.

Another way to determine your watermelon season is by checking for ripeness.

How to tell if a watermelon is ripe

Watermelon can be stored at room temperature up to 7 days. Sliced melons can be kept in a fridge for about 3 days, make sure to cover the exposed surface with plastic wrap or put in a sealed container to prevent it from drying out and absorbing food odors.

Nothing beats a hot day like a cold slice of watermelon. But you are not limited to just eating them fresh out of hand; watermelons can be prepared in many ways. They make a juicy addition to your fruit salad and can make a refreshing smoothie and shake during hot summer days. 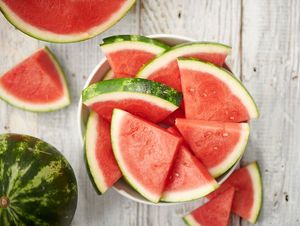